How to make a collagraph - The Basics 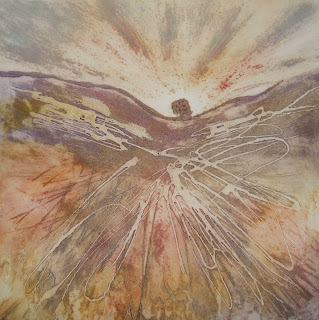 I'm using this image as a basis for this starter piece on collagraphs. The base is mount board and the materials I used were:


A word on the inking process:
I vastly improved my inking technique following a workshop with Peter Wray. Under his guidance I discovered Hawthorne Print Supplies Stay Open inks which to me stand head and shoulders above any of the other inks we used previously and they do what it says on the tin ... they STAY OPEN and so there is no waste from skinning over. I mix the inks with a small quantity of linseed gel or oil to a double cream consistency. Then I apply the ink to the plate using stiff paint brushes (as used for oil painting) working the colour into the grooves, pits and troughs on the plate. A little ink goes a helluva long way.
Once the plate is inked up the excess is wiped off with cotton rag, NOT scrim or tarletan and NOT rag with any kind of napp to it. You can print at this stage or then polish back areas you want to highlight with pieces of tissue.
And a word about the paper:
I use Fabriano Rosapina as it really moulds itself well round the plate. I usually dip half the paper I intend to use in water and interleave it between dry sheets, one wet, one dry, one wet and so on then wrap the paper in a sheet of plastic either right at the start of my studio session or overnight.
When the plate is ready to print I place it on the press bed on a sheet of tissue, with a sheet of the damp Fabriano on top followed by another sheet of tissue and roll it through the press. Hey presto one print. There is no need to clean the plate when you are finished but if you want to change the colour palette it is best to leave the plate for at least a week before you attempt to print from it again otherwise the new colours will get adulterated by the old ones.


Finally, if there is anything in the posting that you've learned and then tried out for yourself it would be really interesting if you would submit a post with an image of the work you have done using the tips you picked up.
Posted by Carols Original Prints at 13:13

Hello Carol !
I really apreciate your postings here and I
love your monotypies !

Thank you so much for posting this stuff !

I have a new post "How to make a Drypoint Collograph" at Jo's Green Room - http://josgreenroom.wordpress.com/

Hi Carol.. Just a suggestion....perhaps once people have added a comment to advise of a new "how to" posting you could then edit your main "how to" post and add the details there so that it is visible on your main page and you can add the link that directs viewers the other "how to" posts, as not everyone always clicks to open the comments ?? What do you think ? Jo

I think that's a very good idea Jo. Will do it later today with yours.

Hi - can't seem to get carborundum here. Is there a substitute that I could use? Sand? Thanks. Lovemyour work.

Hi Ingrid You don't say where here is. It is possible to use sand. Carborundum comes in different grades from fine to quite coarse. The same would apply to sand.

All images and content on this site are © CAROL NUNAN, unless stated otherwise. Please contact me carolsoriginals@gmail.com before borrowing anything from this site. Please also ask before pinning my images in Pinteresting.Thank you.

Carols Original Prints
Hexham, Northumberland, United Kingdom
I am a printmaker in a state of transition. I'm self employed as a printmaker and creative business mentor. I also teach printmaking workshops mainly to adults but also for children and young people.

Galleries where my work is available